For the past 15 years or so, I have maintained an extensive collection of references on the Radical/Extreme/Populist/New/Whatever Right in Western Europe. Because I love TeX and other command line tools of destruction, these references live in a large BibTeX file. BibTeX is a well-documented format for bibliographic text files that has been around for decades and can be written and read by a large number of reference managers.

Because BibTeX is so venerable, it’s unsurprising that there is even an R package (RefManageR) that can read and write BibTeX files, effectively turning bibliographic data into a dataset that can be analysed, graphed and otherwise mangled to one’s heart’s desire. And so my totally unscientific analysis of the Radical Right literature (as reflected in my personal preferences and interests) is just three lines of code away:

To get a more complete overview, it’s best to plot the whole time series (ignoring some very old titles): 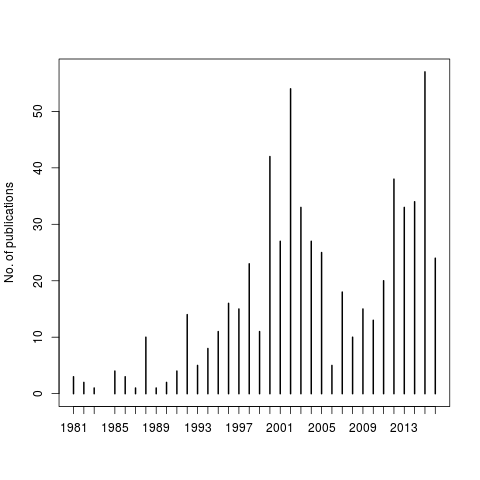 There is a distinct upwards trend all through the 1990s, a post-millenial decline in the mid-naughties (perhaps due to the fact that I completed a book manuscript then and became temporarily negligent in my collector’s duties, but I don’t think so), and then a new peak during the last five years, undoubtedly driven by recent political events and countless eager postdocs and PhD students. I’m just beginning to understand the structure of data objects that RefManageR creates from my bibliography, but I think it’s time for some league tables next.