Blog posts on the Alternative for Germany (AfD)

The Alternative for Germany (Alternative für Deutschland, or AfD for short) is a populist radical right party in Germany.

Back in 2015, I published an article in which I argue that the AfD was then not yet a populist radical right party. More recently, I have demonstrated how how Alternative for Germany and their voters have changed from 2013-2017. Now, both fit very comfortably into the radical-right template. In yet another contribution, I show how the AfD differs from older extreme right parties in Germany, and how the AfD's rise has affected the Germany polity. I also have an article in German on the competition between Alternative for Germany and the LEFT party for the eastern German vote

The Extreme/Radical Right in Europe is one of my main research interests, and for many years, there had been no (successful) party in Germany to occupy this particular place in the political spectrum. This makes the AfD's rise particularly intriguing for me. Besides writing long-form articles on the party and their voters, I also blog (too much) about them. Here are my most recent posts.

I had a chat with the Financial Times about the current woes of the AfD and some other Radical Right parties. As journalists are prone to do, they somehow managed to bury the lede. But it still makes for an interesting read (I think). BTW, the first time you click on the link, you should be through the paywall. Might be a good idea to open it in an anonymous tab.

When Lucke and his supporters left the AfD in 2015, they founded a new party called ALFA. Because another group with a similar name already existed, they had to change it to LKR, which stands for liberal-conservative reformers.

This label neatly encapsulates Lucke’s vision for the AfD. It’s a brand that helped him to establish his former party in an environment that would have been hostile to a more obviously radical right party. It is also a product for which there is little demand at the moment.

👉 Read more about this: “Don’t mention the war”

In the 2019 EP election, a free-for-all for political misfits with no legal electoral threshold, the party polled a cool 0.1 per cent. They have no state-level MPs, no relevant membership base, and, in my professional opinion, no future. And Lucke himself has retired from politics.

But thanks to yet another defection from the AfD’s parliamentary party in the Bundestag (the sixth, I think), the LKR now have a single MP for the remainder of this parliament (about 12 months). This brings the number of parties in parliament back to eight. It’s back to eight, because a much more prominent former AfD MP, former leader Frauke Petry, had also set up a party of their own after the 2017 election. But Petry’s Blue Party is no more.

Nothing of this matters. Petry never managed to poach enough MPs from the AfD to form a parliamentary party (I think she gained a single follower). The new LKR MP will not even bother trying. I wonder whether he, or in fact anyone in the LKR, thinks that they will be able to run a serious campaign next year, let alone win seats. “All political lives, unless they are cut off in midstream at a happy juncture, end in failure.”

The self-styled Corona rebels will hold yet another rally tomorrow. After a massive mobilisation drive that is supported by various far right orgs, they are expecting about 25,000 participants. In all likelihood, they will claim that a million people took part in the March on Berlin™.

To put this in perspective, here are some findings from today’s Politbarometer. 77 per cent of the population want tougher checks to enforce the existing rules. The breakdown by party is intriguing: even amongst the supporters of the AfD, which is desperately trying to jump on the Corona-sceptic bandwagon, about 48 per cent want more enforcement. 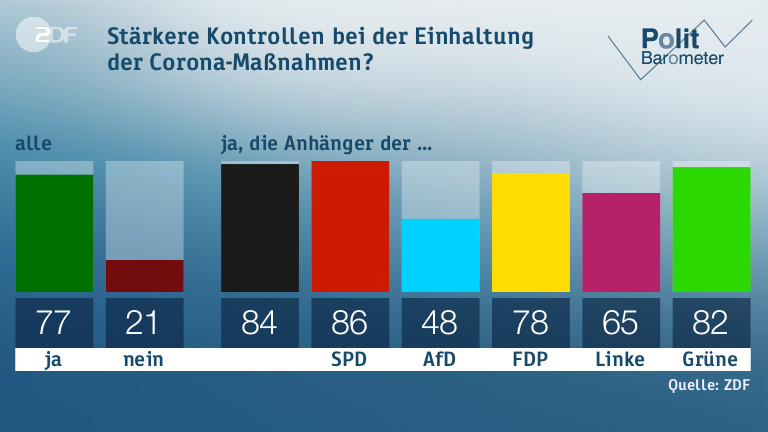 And only ten per cent think that the measures are over the top (60 per cent think they are about right, and 28 per cent want stricter rules). For a mass rebellion, that’s a lousy point to start from. 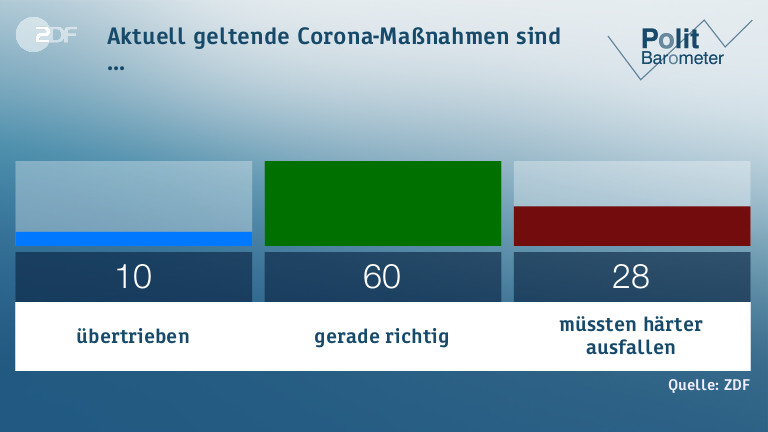 A retired “general”, a symbolism that is borrowed from France’s Yellow Vests – what could possibly go wrong? Meet Italy’s latest populist craze, the Orange Jackets.

Germany’s Home Secretary said in an interview that the AfD wants to destroy the state and put this interview on the Home Office’s website. Now the FCC ruled that he was not allowed to do that. But the ruling does not say that Seehofer’s claim is factually incorrect. Like in previous cases, the judges upheld a kind of two-bodies-theory. As a politician, Seehofer was free to make this statement, but as a minister he was not allowed to use his official platform for distributing it.

Over at the Quantiative Peace, Joshua Zingher looks at Trump’s base. The bottom line? Trump’s 2020 path to the presidency is narrow. May he stray from it.

“Why are German Nazis training in Russia“? That is a bit of a rhetorical question, but the article has at least some answers.

I’m currently working on a paper that looks into the role that Germany’s eastern states (aka “the new Länder”, the ex-GDR …) played for the breakthrough and the consolidation of the “Alternative for Germany” party. This figure shows support for the AfD from 2013 to 2020.

The graph is a teeny-weeny bit busy, so here is the extended legend 👉 Circles are results from state (Länder elections), labelled with state codes. Squares are Bundestag, diamonds are European parliamentary elections. Filled symbols represent eastern Länder, or partial results for the eastern states only (Bundestag and EP elections). Hollow symbols represent the western states/partial western results. The blue line is the (locally smoothed) average over about 200 national elections polls from the Politbarometer (FGW) and Deutschlandtrend (Infratest-dimap) series. There are four main observations.

Not exactly a new finding, but the AfD does much better in the east than in the west. In fact, so much better that some observers see the party as specifically eastern problem. This is not correct, but the difference is striking. Even in the 2013 Bundestag election (when the AfD campaigned as a soft-eurosceptic, “liberal-conservative” outfit), the party was clearly more popular in the east. Possible reasons: fewer partisans, lower levels of institutional trust, more xenophobia.

The AfD might not have survived 2015 without the eastern states

Almost exactly 5 years ago, the AfD was almost falling apart (also see just about every other of my blog posts from that period). Support for the party fell below 5 per cent (also see the section after the next), prominent members threatened to leave or simply went. The FAZ called them, in their professional journalistic assessment, “a laughing stock”. Radically transformed (see what I did here?), the party bounced back in 2016, but during this period, their only full-time politicians with access to funding and the media (apart from two remaining MEPs) were about 30 state-level MPs who had won seats in the 2014 series of elections in Brandenburg, Saxony, and Thuringia – incidentally on platforms that presaged the AfD’s trajectory towards the Radical Right.

What role did Germany's eastern states play for the breakthrough & consolidation of the #AfD? 4 observations: vote share consistently 2-3 times higher; party might not have survived 2015 w/o east, until 2017, eastern (state) MPs outnumbered western by large margin. pic.twitter.com/8Iv7BfoZf9

It’s not directly visible in the graph, but: the higher vote share in the east (combined with the electoral calendar, the relatively large number of eastern states, and the disproportionate size of small-state legislatures) meant that until the Bundestag election in September 2017, there were twice as many AfD (state) MPs in the east. Although the east has just over one fifth of the population and about the quarter of the AfD members, a large chunk of the party elite was recruited (though not necessarily born) in the east. Even after the 2017 election, about half of the MPs (state and federal) were eastern.

Journalists love a good story, and they like to link the AfD’s current underwhelming performance in the polls to the fact that people are weary of populists in a crisis, and the AfD’s mixed messages on COVID. But it is also clear that the AfD’s support in national polls peaked in 2018. The declining salience of immigration and the revelations on right-wing extremists within and around the AfD have not exactly helped. Support for the party has ebbed and flowed before, and local polynomial regression by design tends to exaggerate trends at the margins of a plot, but it is clear that support began to fall months before Corona became the dominant issue in Germany and elsewhere. 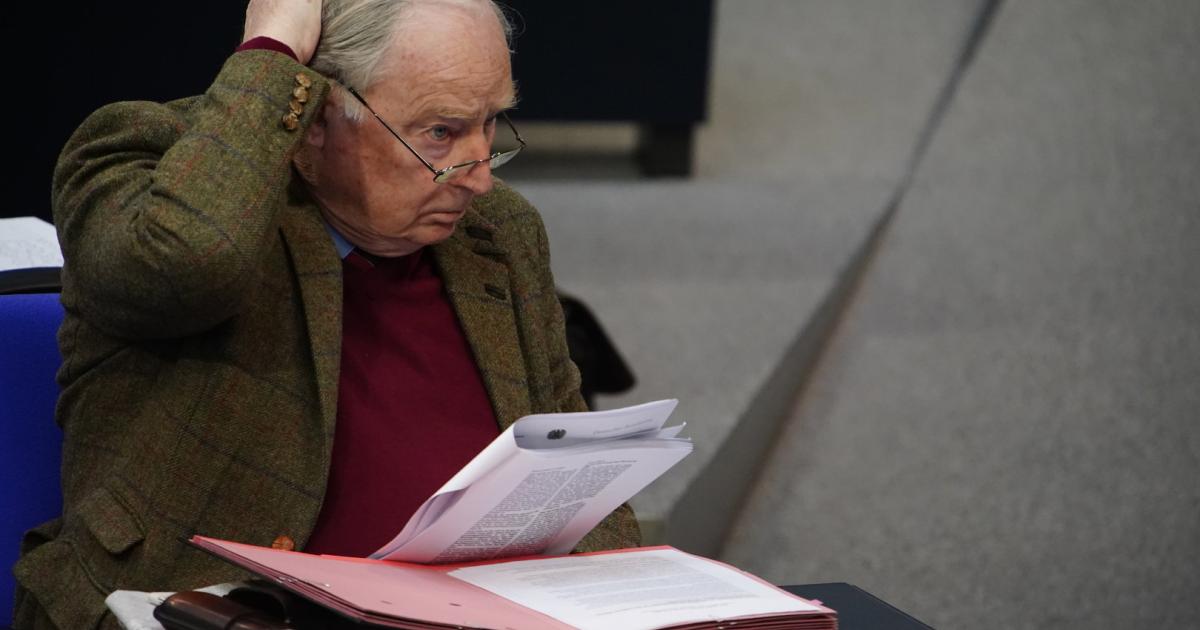