Which publishers are the most relevant for Radical Right research? Good question.

Kai can you also export that data by publisher? Asking for a friend 😉

Currently, most of the items in the The Eclectic, Erratic Bibliography on the Extreme Right in Western Europe (TM) are journal articles. The books/chapters/articles ratios have shifted somewhat over the years, reflecting both general trends in publishing and my changing reading habits, and by now the dominance of journal articles is rather striking. 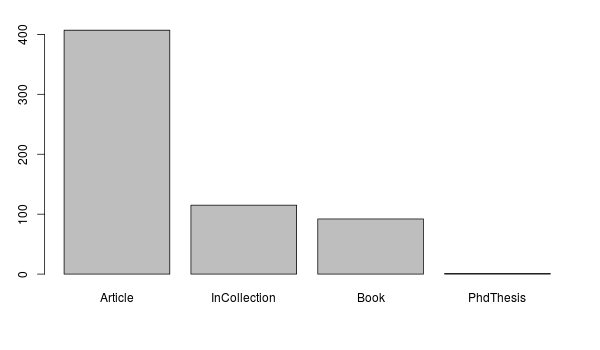 One in three of this articles has been published in one of the four apparent top journals for Radical Right research: the European Journal of Political Research, West European Politics, Party Politics, and Acta Politica. I say ’apparent’ here, because this result may be a function of my (Western) Eurocentrism and my primary interest in Political Science and Sociology. Other Social Sciences are underrepresented, and literature from national journals that publish in other languages than English is virtually absent.

But hey: Laying all scruples aside, here is a table of the ten most important journals for Radical Right research:

I did a similar analysis nearly two years ago. Government and Opposition as well as Comparative European Politics are new additions to the top ten (replacing Österreichische Zeitschrift für Politikwissenschaft and Osteuropa), but otherwise, the picture is much the same. So if you publish on the Radical Right and want your research to be noticed, you should probably aim for these journals.

20 thoughts on “What are the most important journals for Radical Right research?”