Believe or not, even Al-Jazeera got interested in the Thuringia state election. So we had a chat, and most of the substance made it into this post ? 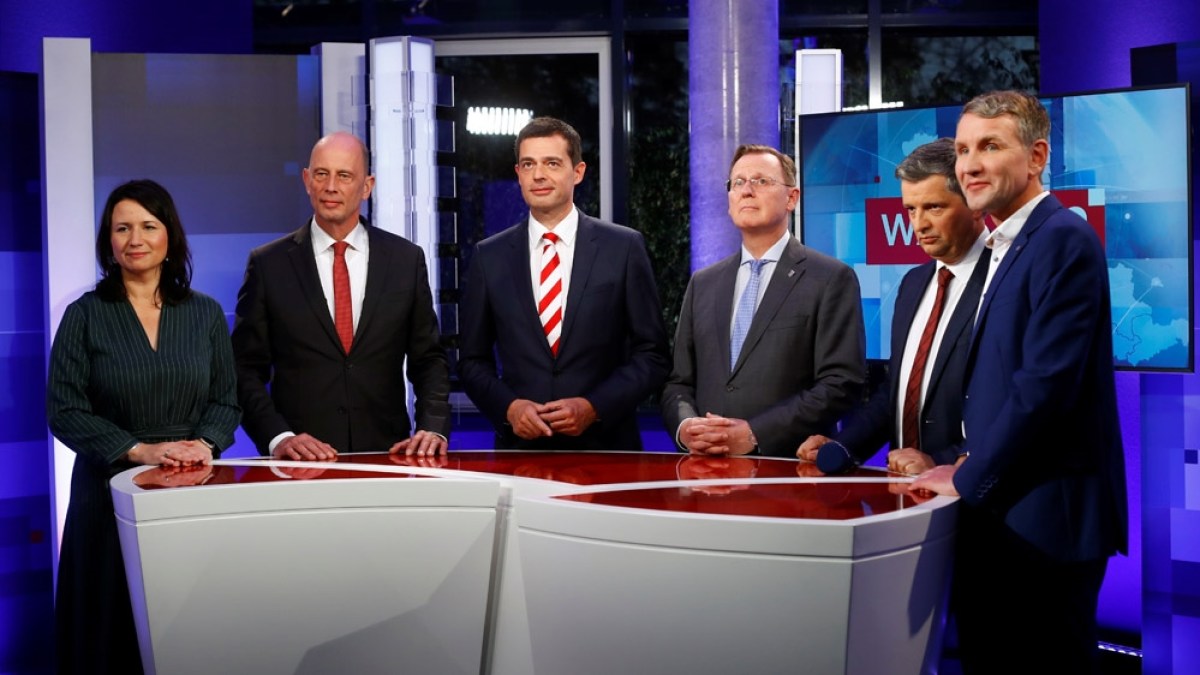 Why waste my life writing lengthy books that no-one is going to read? Why go through the pain of peer review? Why, in fact, wait for the actual election results to come in? So here is my list on hot takes on the Thuringia state election.


Last weekend, a video of a speech that Björn Höcke had given at a New Right think tank in November was put online (gone now, but google it – there must be copies). In that speech, Höcke (originally trained as a history teacher), using a lot of jargon from biology, talked about African and European “species” of humans, who allegedly pursue different reproductive strategies. For the anoraks, that was nothing terribly new, but the general public was appalled by what boils down to pretty old-fashioned racism.
Just now, Der Tagesspiegel reports that party leader Petry tried to kick Höcke out of the party but failed to win a majority in the executive committee for such a motion. The irony is of course that Petry’s predecessor Lucke tried to get rid of Höcke a long time ago. That was before he was ousted by Petry, whose ascendancy was supposed to signal a shift to the right.

One major asset of the pre-Petry AfD was its disconnect from the Extreme Right. But the AfD in Thuringia has always been a funny bunch, and Lucke tried (without success) to remove its leader Björn Höcke from the party.

With Lucke gone and asylum applications at a record high, Höcke is now organising large-scale anti-refugee demonstrations in front of the Thuringia state parliament, which, by strange coincidence, attract sizable numbers of hooligans, neo-nazis, and NPD supporters. For more details, have a look at this article on the very useful Blick nach Rechts blog (in German).

Various media report this morning that the AfD caucus in the Thuringia state parliament has asked two of their MPs – Jens Krumpe and Oskar Helmerich – to resign their select committee memberships and/or has withdrawn the whip from them. Both had refused to sign the “Erfurt Resolution” that was initiated by their leader Björn Höcke (heavy Ümlaut alert), but had rather given their support to the competing “Germany Resolution”. Meanwhile, Spiegel Online has unearthed a blogger who claims that Höcke has written pseudonymously for a party paper of the right-wing extremist NPD. The caucus has not made a comment on any of this, but took this golden opportunity to issue a statement on the negative impact of bureaucracy on Thuringian artisans.

In related news, the Erfurt Resolution has now accumulated approximately 1650 signatures (according to them) and 1767 likes. The Germany Resolution has 675 likes and has not yet posted an update on the number of signatures.


Various news outlets reported this afternoon that there had been talks, perhaps even agreement between the (state) CDU and the (state) AfD to prevent Ramelow from being elected Minister-President. Obviously, nothing came out of this (neither party put a candidate on the slate), but still: Wither the blessing of the leadership, Merkel has created a cordon sanitaire between CDU and the AfD. Talks with the intention of forming a coalition, or at least gaining AfD support for a CDU minority government would be an act of open rebellion.Photo by Tjflex2

On Friday, the state parliament at Erfurt voted in Bodo Ramelow as Minister-President of Thuringia. He is the first member of the Left party to hold such an office, backed by the first ‘red-red-green’ (Left/SPD/Greens) coalition ever. 25 years after the fall of the wall, that is still a highly controversial constellation. Ramelow has been trying to diffuse the issue for months, and kicked off his reign with an apology to the victims of the former socialist state party SED, the pre-predecessor of the Left. His election also marks the end of a 24-year-spell during which the state’s Christian Democrats held the top executive job in this state.

The real significance, of course, lies beyond the woods of Thuringia. Taking over the office of the Minister-President is perhaps the most important step in the long game of normalising the Left that began in the mid-1990s, when the PDS (the predecessor of the Left) tolerated a red-green minority government in Saxony-Anhalt. Normalising red-red-green coalitions, on the other hand, is even trickier business. The Greens merged in the 1990s with what remained of  the East German dissident movement, and this legacy makes any co-operation with the heirs of the former oppressors highly unpleasant. The SPD, on the other hand, has two swallow the fact that at least in Thuringia, they are no longer the strongest force within the left camp. Moreover, the SED was the result of a forced merger between the East German SPD and the east German communist partner, and the final ingredient in today’s Left was a group of SPD dissidents who broke away from the SPD ten years ago. That is a lot of shared history overshadowing the present.

From the SPD’s point of view, however, there is clearly a ray of sunshine to this story: The SPD is now part of 14 (out of 16) state governments and has 9 Minister-Presidents amongst their number, four more than the Christian Democrats. That certainly makes governing as Merkel’s junior partner in Berlin a little more bearable.