In the last couple of weeks, much has been said and written about the turning tide in German public opinion on refugees, the growing rift between Merkel and the CSU, the potential of a back-bench rebellion against the chancellor and party leader etc. But one of the most interesting (in my book) details is buried in the nitty-gritty details of Friday’s Politbarometer report, which I turned into a little bar chart to illustrate my point. 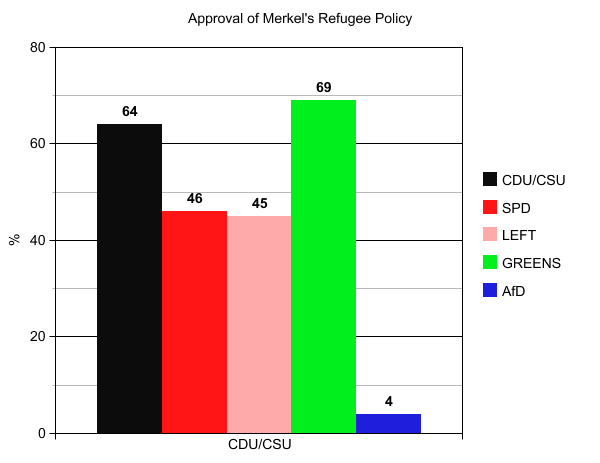 So 64 per cent of the Christian Democrats’ supporters still approve of Merkel’s policies (and that includes the allegedly outraged CSU voters). But support is significantly lower amongst supporters of the Social Democrats (SPD) and Socialists (Left). This could be written off as coloured by partisan sentiment. It might even be the case that some lefties are unhappy because they want more generous policies. But compare this with the approval rating amongst supporters of the left-liberal Greens. Unlike the SPD and the Left, the Greens gun chiefly for the upper-middleclass lefty vote. Cue my article on competition between traditional left-wing parties and working class parties 2.0, i.e. the radical right.

11 Responses to “Is there potential for anti-refugee left-wing populism in Germany?”