Chatham House and the Institute of Iranian Studies at St. Andrews have published a preliminary analysis of the recent election in Iran. The paper (though it is based on official stats) suggests that the election was indeed rigged to a considerable degree. Here is the complete analysis of the Iranian Presidential Election 2009.

p.s. Just discovered that Ahmadinejad has his own blog. The world must surely be coming to an end. Then again, it has not been updated since 2007.

I kid you not: yesterday the Daily Mail, not normally a promoter of civic education, published a Venn diagram outlining the overlap between the three main parties’ proposals for dealing with the parliamentary expenses mess. As diagrams go, this was not exactly brilliant. A lot of colour and space were wasted to illustrate the fact that while each party has its own preferences, they could possibly agree on a set of four or five measures. And no, because the font size was large and time was short, they did not pay any attention to proposals supported by say the Conservatives and the Liberals which are opposed by labour.

Nonetheless, they seemed to get the basics right. Most amazingly, the whole thing was correctly labeled as a Venn diagram. Just like that, no quotation marks, no references to quirky scientists. Is the Mail where all those students with a training in formal analysis end up? Good graduates go everywhere, bad graduates … ? 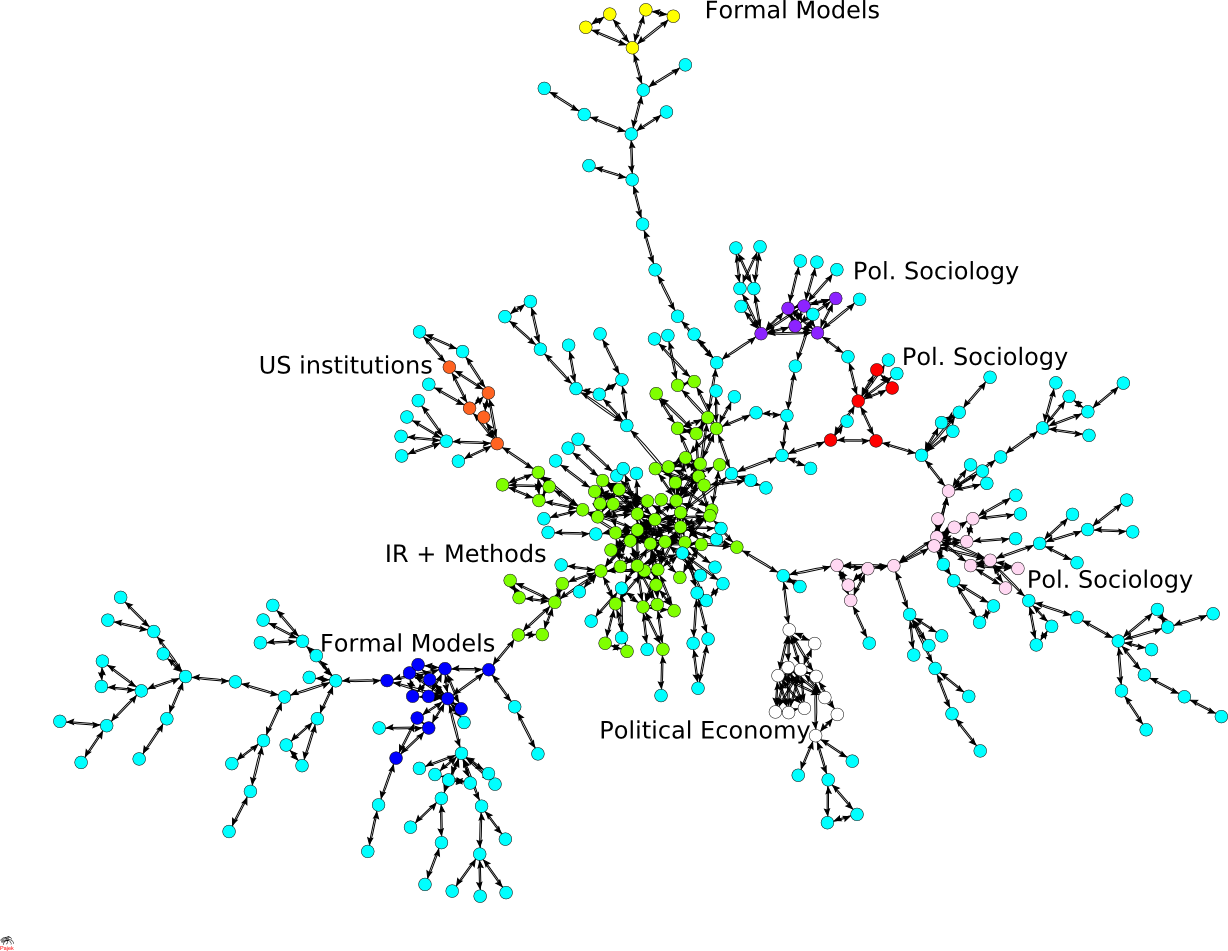 Last Saturday, we presented our ongoing work on collaboration and citation networks in Political Science at the
4th UK Network conference held at the University of Greenwich. For this conference, we created a presentation on Knowledge Networks in European Political Science that summarises most of our findings on political science in Britain and Germany and provides some additional international context. The picture on the right shows a subnetwork of about 320 scientists who mutually cite each others’ work. Watch out for the dense IR/methods cluster and the lack of (mutual) connections between the dispersed political sociology and formal methods camps.

Our project on social (citation and collaboration) networks in British and German political science involves networks with hundreds and thousands of nodes (scientists and articles). At the moment, our data come from the Social Science Citation Index (part of the ISI web of knowledge), and we use a bundle of rather eclectic (erratic?) scripts written in Perl to convert the ISI records into something that programs like Pajek or Stata can read. Some canned solutions (Wos2pajek, network workbench, bibexcel) are available for free, but I was not aware of them when I started this project, did not manage to install them properly, or was not happy with the results. Perl is the Swiss Army Chainsaw (TM) for data pre-processing, incredibly powerful (my scripts are typically less than 50 lines, and I am not an efficient programmer), and every time I want to do something in a slightly different way (i.e. I spot a bug), all I have to do is to change a few lines in the scripts.
After trying a lot of other programs available on the internet, we have chosen Pajek for doing the analyses and producing those intriguing graphs of cliques and inner circles in Political Science. Pajek is closed source but free for non-commercial use and runs on Windows or (via wine) Linux. It is very fast, can (unlike many other programs) easily handle very large networks, produces decent graphs and does many standard analyses. Its user interface may be slightly less than straightforward but I got used to it rather quickly, and it even has basic scripting capacities.

The only thing that is missing is a proper manual, but even this is not really a problem since Pajek’s creators have written a very accessible introduction to social network analysis that doubles up as documentation for the program (order from amazon.co.uk, amazon.com, amazon.de. However, Pajek has been under constant development since the 1990s (!) and has acquired a lot of new features since the book was published. Some of them are documented in an appendix, others are simply listed in the very short document that is the official manual for Pajek. You will want to go through the many presentations which are available via the Pajek wiki.

Of course, there is much more software available, often at no cost. If you do program Java or Python (I don’t), there are several libraries available that look very promising. Amongst the stand-alone programs, visone stands out because it can easily produce very attractive-looking graphs of small networks. Even more software has been developed in the context of other sciences that have an interest in networks (chemistry, biology, engineering etc.)
Here is a rather messy collection of links to sna software. Generally, you will want something that is more systematic and informative. Ines Mergel has recently launched a bid for creating a comprehensive software list on wikipedia. The resulting page on social network analysis software is obviously work in progress but provides very valuable guidance.