Five years ago, I published a paper on the apparently inevitable decline of party identifications in Germany. The somewhat cutesy title of the piece is Dead Men Walking. It is based on the ‘Politbarometer’ series of monthly polls going back all the way to the late 1970s, and in my humble opinion, it is a rather neat application of the “analysing repeated surveys” approach. One of my main findings is that on average, the share of party identifiers declines at a rate of about 0.7 percentage points per year. Recently, I re-ran my scripts on a new data set that extends the old series all through the naughties. As you can see, party ID in Germany is not exactly alive and kicking, but the rate of decline has fallen considerably over the last decade. As one wise man once observed, the core problem with predictions is that they are about the future. 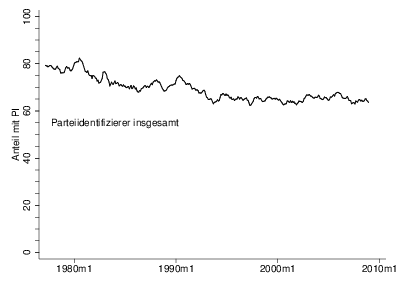