Next week, the European Parliament will celebrate its 7th direct election. However, this will be the culmination of 27 national campaigns. Here is a post on the lack of truly European content in the European I wrote for Andrea Römmele’s and Thorsten Faas’ “Wahlen nach Zahlen” blog (in German).

With the upcoming EP elections, I felt obliged to check out the profiler sites my colleagues have put on the internet. I started with Germany’s wahl-o-mat that has been around for a number of years. After evaluating 30 statements, the program decided that I should vote for the German Liberals, which was not such a big surprise. The Bavarian Christian Democrats and the New Left Party were the biggest distance away from my ideal point, not least because my preferences seem to be more pro-European than these parties. 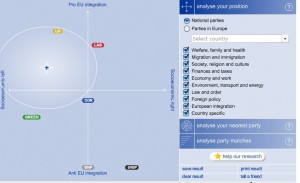 Why I should vote for the LibDems (maybe)

Given that I’m going to vote in the UK, I next tried the EU Profiler, which is an international project that aims at providing the relevant information on party positions for all 27 member states. After evaluating a new set of another 30 items, I was presented with a fancy two-dimensional graph that shows that I should vote for the UK LibDems, although they look more like my least-bad option since the policy space around my ideal point is not exactly crowded. This is because I am luke-warm (but warm) when it comes to European Integration plus a bit of a lefty when it comes to the “socioeconomic” dimension. This dimension, however, looks a bit dodgy, because according to the map, the Tories would be ever so slightly to the left of Labour. Well, maybe they are. At least no one suggest that I should vote UKIP or BNP (who sent me a flyer the other week, suggesting that all those immigrants should leave the UK).

In a bold move I switched from British to German parties and was a little surprised to learn that I should vote New Left, which is reasonably close to my ideal point while the Liberals are rather far away. So it would seem that I suffer from a national-political personality split. 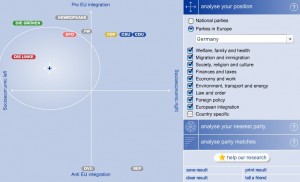 Should I vote for the Left party?!?

Still not content with the results, I returned to the wahl-o-mat and discovered that they too have teamed-up with researchers from other countries, meaning that we have apparently two competing pan-European profiler projects. So I answered a final UK-specific questionnaire and was reassured that I should indeed vote for the LibDems, though apparently for different reasons.

While their accuracy of the results might be debatable, these tools provide a lot of information and are great fun. 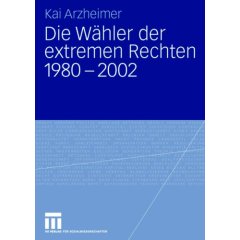 It’s almost unbelievable: after some six months of communication problems with the publishers, my recent book on the extreme right vote in Western Europe since the 1980s is finally out and ready for you to order and read (qualification: if you read German). If you don’t read German, you might still be interested in a brief English summary of my findings on the Extreme Right vote, including various presentations and other goodies.
Newer Entries