Much merriment in the Eastern state of Thuringia: 25 years after the fall of the wall, the Greens and the SPD in the state parliament are poised to form a coalition with the Left (die Linke), which would give the Left its first minister president ever.

What’s the Matter with the Left?

Predictably, this is creating all sorts of backlash. On the surface, it is all about Thuringia, and about the Left’s uneasy relationship with the past. But on another level, it’s about the prospects of triple left (or red/red/green) coalitions in Western states and ultimately on the federal level.

The Left is one of the strangest creatures in German politics. It was formed in 2007 by a merger of the WASG – a group of SPD dissidents who rejected the welfare reforms/cuts (delete as appropriate) introduced by the Schröder government from 2002 on – and the PDS. The PDS in turn came about by renaming (twice) East Germany’s Socialist Unity Party (SED), the local equivalent of the Soviet Union’s communist party. Consequentially, the continuing role of the PDS after 1990 has been controversial. Right now, the Greens, the SPD and everybody’s hipster grandmother demand that the Left apologises for four decades of state socialist authoritarianism.

What is Left of the SED in the Left? (sorry, could not resist this one)

The other day, I heard Dietmar Bartsch on the radio, who played an instrumental role as one of the organisers of the WASG/PDS merger. Asked about the Left’s relationship with its state socialist past, Bartsch argued that the media and the Left’s political enemies had overplayed the issue: After all, only one per cent of the SED’s previous members were still enrolled in today’s Left. That sounds like a tiny fraction, right? Right, and this is because the figure (if it is correct) is misleading, to say the least. After all, the relevant question is not what became of the SED members, but rather how important the old guard still is today. So lets do the math.

In 1989, the SED had 2.3 million members, roughly 14 per cent of the GDR’s total population. After the wall came down and unification became a real prospect, they began to leave the sinking ship in their droves. Around the time of unification, less than 10 per cent of the original number remained, and over the ensuing couple of decades, many more left or simply passed away, as it were chiefly the elderly who had been loyal to the party.

Against this backdrop, Bartsch’s one per cent figure looks plausible, so let us assume that that many of the old SED stock still remain in the Left. That works out at 23,000. Is that a lot, or not? Over at the FU in Berlin, Oskar Niedermeyer has been compiling party membership figures since the dawn of time. In 2012 (the latest data available), the Left had about 68,000 members. So roughly one third of the current members of the Left were already members of the SED before the Iron Curtain lifted.

Obviously, this is indicative of a strong post-socialist streak within the party. That may or may not be a bad thing, but in my book, the politically relevant fact is that Bartsch built a smokescreen around this simple fact, and that the interviewer – a thoughtful and knowledgeable person – let him get away with it. The bottom line is of course that we need to promote basic statistical literacy: The probability of being a member of the Left, conditional on having been a member of the SED (p(Left|SED)) can be very different from the probability of having been a member of the SED, conditional on being a member of the Left (p(SED)|Left), unless both parties are of equal size. That is Bayes’ Rule for you, Dr Bartsch. Next.


In the past, I did a lot of multi-level modelling with MLwiN 2.02, which I quickly learned to loath. Back in the late 1990s, MLwiN was perhaps the first ML software that had a somewhat intuitive interface, i.e. it allowed one to build a model by pointing and clicking. Moreover, it printed updated estimates on the screen while cycling merrily through the parameter space. That was sort of cool, as it could take minutes to reach convergence, and without the updating, one would never have been sure that the program had not crashed yet. Which it did quite often, even for simple models. 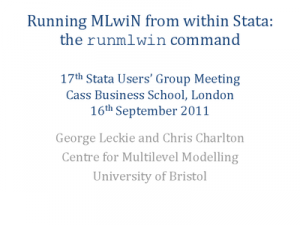